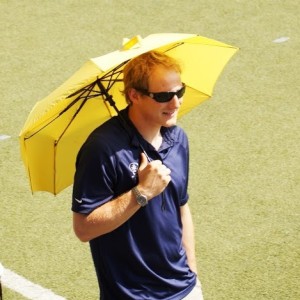 My name is Eric Heintze. I am from a mid-sized town called Jena (Germany). Common for Germany at that time, there was no lacrosse team in my town, and therefore I did not even know what lacrosse was. After my high-school diploma in 2003, I took a gap year at the University of Bath (UK). This was the first time I got exposed to the game of lacrosse. At that time the team was very successful using players as coaches. After my first year of playing lacrosse I was already completely in love with the game. When I chose to study physics in Stuttgart (Germany, the town of Mercedes Benz and Porsche), I did so with the intention to keep playing this sport. Fortunately there was already a group of players who practiced 2-3 times a week at the university field with the occasional beer afterwards.

Over the course of a few years, this small group kept growing and improving, moving from the university field to a real sports club, and surprisingly made it to the semifinal of the German championships in 2007.

After that I went abroad to study at the University of Oregon in a beautiful town called Eugene. Besides studying I played for the Oregon Ducks lacrosse team, which competes in the MCLA. In this environment I got acquainted with a more professional approach to the game that included weightlifting, practice every day, study hall, and long bus rides across the whole West Coast. Alongside all of this, I made a lot of good friends and brought home precious lessons, so it was worth every drop of sweat.

Back in Germany, Stuttgart went back to the semifinal and finished 3rd in the nation, with me as one of the player-coaches. In 2010, me and four other Stuttgart players made the German national team to compete in the world championships in Manchester (UK). Due to the absence of the Iroquois, Germany took the spot in the blue division. This gave me an opportunity to take a closer look at why the US, Canada and the other blue division teams play lacrosse at such a high level which I usually only see on Youtube.

In 2011, Stuttgart lost the national championship final and finished as runner-up, the same result was achieved again in 2012. Mentally, this was very challenging on the team and we learned a lot during that time. With the knowledge we gained from these games, we were able to finally win the German championship in 2013. By now we are probably one of the only top teams that still plays with two player-coaches at its top and I must say that I am proud of that fact. I am now in my 7th year as a player-coach and am pursuing my PhD in Physics. Currently I am preparing for the world championships 2014 in Denver.

Overall these years I have been fortunate enough to play with teams consisting of players from different cultural backgrounds and with different approaches towards lacrosse practice. I have had many different great coaches who taught me a lot of things and influenced my way of coaching. Now I feel it is time to share my experience and give back to the game. 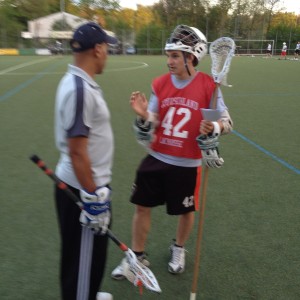 My name is Jan Miofsky and I am from a small village near Mainz (Germany). I was introduced to lacrosse when I began my studies in Stuttgart.  In 2003, Stuttgart was still a newly formed university team at the university. After two years of struggling as a midfielder, I went to play defense as I had been playing defense my whole life in soccer. Except for a one year stint at attack in 2013, I have been playing defense and LSM since then. From there on lacrosse got more and more serious due to the growth of the Stuttgart lacrosse community.

In 2008 I made the cut to Team Germany and have been playing on the squad for three tournaments now, with my fourth one coming up this summer in Denver.

Compared to Eric I am not a person who jumps on every request and says “yes” to do it, but I do what needs to be done and help out when I can. This way I slowly got more and more into coaching; first as a defense captain and from 2010 on as an official coach.

Beside coaching I majored in technology management at the University of Stuttgart. I put my main focus points on decision making, innovation management and strategy. I am currently working at a mid-size IT company in Stuttgart. My main focus is to drive innovation and business development processes. Beside that I work on improving collaboration and knowledge exchange between departments, partners, and research institutions.

I am grateful for all the experience lacrosse has given me already and would like to thank all the coaches, teammates, and team managers I had and am going to have. At this point I or we would like to mention BJ Wroten for his help with the Stuttgart lacrosse program and the great conversations we had with him. I can’t imagine a better sparring partner to drop off ideas and develop as a player, person, and coach. With this blog I hope to do the same and give something back to the game.